Feeling a little emotional today as I realize my baby is 3. He is the happiest kid and the easiest kid. The terrible twos were a breeze with him. I think he is getting a little bit more stuborn and independent in the last couple of weeks though. Hopefully 3 is just as easy as 2 was.
We call him captain obvious because he tells you exactly what is going on. He told my brother and sister. "That's my Mom".  If we are outside he will tell anyone "Hey we are outside".

He puts him self to sleep sometimes, which is really a nice change from Peyton who has a hard time sleeping.
Houston will eat pretty much everything. He has always been a really good eater. He his a meat and potatoes kind of guy.
Right now he is into all things boy. Cars, Planes, Trains and Trucks! It often shocks me how extreemly opposite my kids are when it comes to toys. Peyton is all girl and Houston is all boy.
He loves peeing on trees and outside.... He can hold his own with his sister she has him mental beat still, but physically he's right up there with her. Last week at the pool he was dunking her.
He has no fear when i'm around. He jumped into our friends pool two weeks in a row with out a life jacket on and when we pulled him out because he was bobbing up and down he was laughing... It nearly gave me a heart attack. TWICE.
He is kind of clumbys he use to hit his head on everything. He dropped some peanut butter on his right big toe last year and he stubbs it alot. It really never heals. We call it his peanut butter toe. :)
He still naps for me about and 1 to 2 hours a day.  He won't be starting school in the fall. I'm going to wait to send him so that he is the oldest.
He really loves trying to keep up with his sister. He has learned so much from watching her.
He is a mommas boy through and through, and I love it. He has to know where I am at all times. I'm lucky that he still lets me cuddle him and he loves it when I crawl in bed with him. I hope that dosen't change anytime soon.
He has his mommas personality and his daddy's looks or so that's what EVERYONE tells me.

For his party he wanted a bounce house again. He loved it!! He got a lot of cars and trucks that he stayed up till 11:00pm in his room playing with. 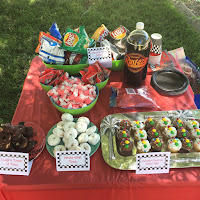 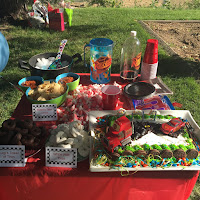 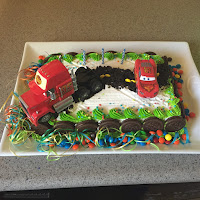 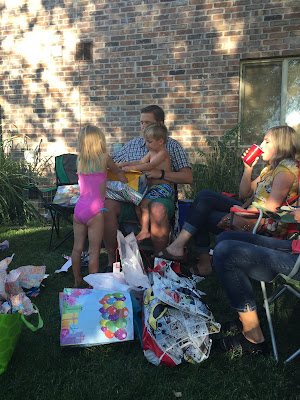 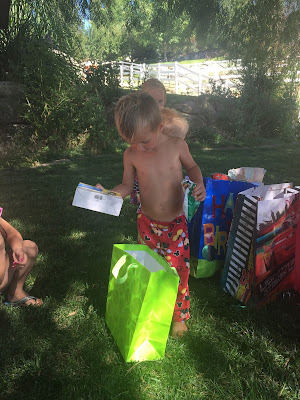 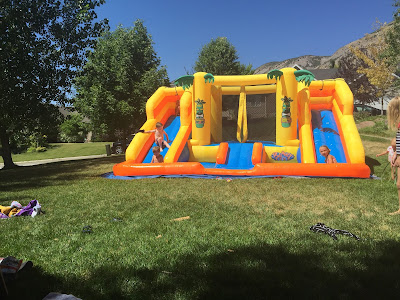 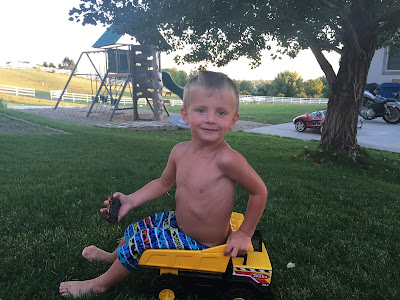