Showing posts from February 6, 2012
Show all 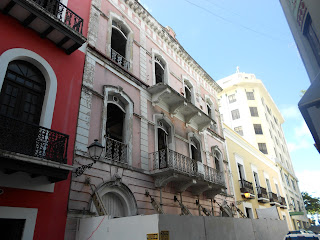 Mike and I were finally able to go on our Cruise that has been booked for a year and half now. I got pregnant with Pey and was too far along to with all of the family and friends. Mike and I went by ourselves on this adventure.

We dropped Peyton off with Mi Mi and Pa Pa and it actually wasn't too hard because we still had so much to do that night. Payden and Annette picked us up including Kilo and we went and dropped him off in Sandy at the Tesch's. Then it was off to the airport. We were pretty early so we started on a mini series called Downton Abbey and we highly recommend it.

The plane ride was okay, we arrived in ATL around 4:00am and I was dead tired. Then we left there about 6:00 and arrived in Puerto Rico. We got a taxi and found our apartment in Old Town San Juan.
We were excited to get out and walk the city. It was a Thursday the day before 3 Kings so there were a lot of people and celebrations going on.

There was this little cafe a block down from our apartment. The …
3 comments
Read more
More posts