By The Halls - March 12, 2012
Houston Michael Hall
is the name we have chosen. Mike really loves it, Houston is his late Grandfathers name and some called him Huey baby. I know I've had a few others growing up, but I picked Peyton and it's only fair daddy gets to pick his little boys name.

15 Weeks
I have woke up the past few nights feeling nauseas and also again in the mornings. I have to force my self to eat because once I do two things can happen. Most of the time I feel A LOT better. Sometimes it all comes back up.
I am working out (slow jogging, mostly walking and some lifting) almost everyday which feels great I think it is helping me sleep better and give me more energy during the day. I didn't start walking with Peyton until I was 8, 9 months along there was no way I could have done that with her.  I am still weigh less than I did when I got pregnant with Peyton, but my pants are so much tighter. I am defiantly showing a lot faster with Houston. I am not as worried about gaining weight this pregnancy now that I know I can loose it. I would just like to stay in the recommended weight gain which is 25 to 35 pounds. In case you didn't know that. I certainly didn't and defiantly didn't say in that with Pey :)
Since finding out Houston is on his way I kind of went a little overboard and bought a lot of clothes. It is like having a first child in a way. If it would have been a girl I don't think I would have gone as crazy because Pey has SO many clothes especially those first 6 months.

My sister-in-law Whitney had her shower. We made bows for Cozy and ate some amazing food. I wish I would have done this at my shower it was such a fun thing to do.
Here we are with our cute bellies and yes i'm holding Peyton's Piglet. I am 16 weeks and 36 weeks for her. 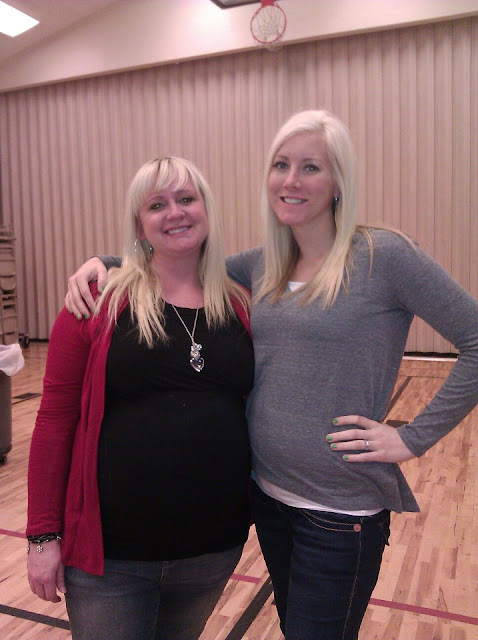 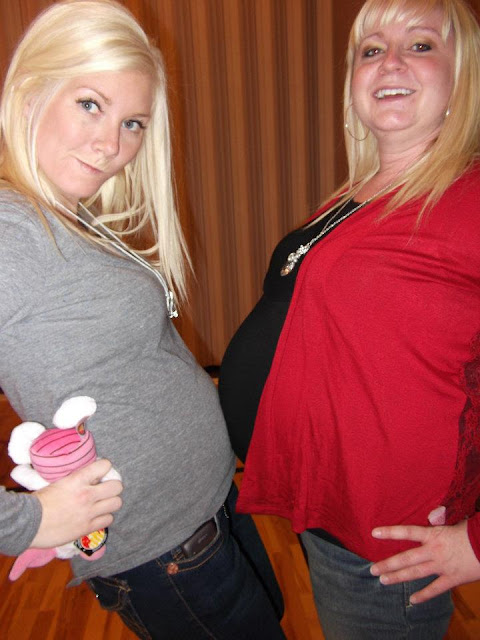 16 Weeks
I had a check up today and my doctor told me my due day is for sure the 10th of August! Heart beat was good and I'll find out the sex at my next appointment. HA! I should say we will have a confirmation on the sex since we know our little boy is on his way.
I haven't been sick this last week and so I was worried there was something wrong with me, the doctor said you wouldn't be Nikki if you weren't worried :) tis true. I have noticed I'm so hungry all the time, I am shocked at how much I can eat and not feel full.

17 Weeks
I am still hungry all the time, I'm trying to be healthy. Everything I crave is salty junk though. I really want some curly or criss-cut fries from Arbys or Carls Jr. with JCWS fry sauce... I have to say Mike was a sweetheart and surprised me with some the other day. I sure love that man!  Along with wanting to eat everything in sight I am also still getting sick around 11 at night. I try to just sleep it off and by morning I'm hungry again and ready to go.
I decided the reason I was getting sick is because we eat dinner around 6:00 and I don't eat again for the rest of the night. I was at the store the other day and was looking for some steamed broccoli when I discovered they sell Edamame. This is one of my favorite things to get at a Sushi restaurant. They are little soy beans still in the shell.  They were about $1.50 so I figured they'd be nasty. It just had to be too good to be true. NOPE they were amazing. I just got done finishing them off and I can't wait to stock up. They are salty too so perfect for my fry/chip cravings. I was getting sick of Claussens :) Anyway if your looking for a healthy snack there you have it folks try out the Edamame!

OH HELLO IN THERE!
We have movement people. With Peyton I felt the flutters and the popping around now. I never did feel that with Houston. I was just sitting in bed one night while Mike was reading and bam. I was like no that felt more like a little nudge than a flutter. So I brushed it off and bam it happened again. Then it happened a few nights later and there not hard just tiny little pokes sort of. I have no idea how to describe it. He is in there and I love feeling him move. I just hope in a few months his feet aren't in my ribs now that was painful.

18 Weeks
I am in the fat stage of where you can see the tire around my belly, but your not quite sure if its a real baby or food baby. (I think) I'm sure I'll just pop like I did with Pey at 20 weeks. I hate seeing people I haven't seen in a long time in this stage. I can't just say Hey I'm pregnant. I have been getting sick if I wait more than 3 or 4 hours between meals. He is a hungry boy I guess and still just kicking away.

Lately I've been trying to figure out if we want to buy two cribs. Peyton will be about 18, 19 months old when Houston is born. I've talked to some moms that have kids close together and they say put the newborn in the bassinet for as long as you can then transition Peyton into a toddler bed. I think we will try this.
I also keep thinking about having two kid in diapers. I DON'T want to do it. I know that I will have to though. My goal is to have Peyton potty trained by two and a half. HA like that will happen, but one can hope.

paislea said…
you're so cute nikki! it was so much fun seeing you the other night! i love reading your stories! peyton is adorable and i can't wait to see little houston!
March 12, 2012 at 9:47 AM

Anonymous said…
My brother and his wife are in a similar situation with about 19 months between babies, and they're going with a toddler bed. I don't know if that helps at all... But HOLY COW! I need to see you again! This semester has been so crazy but by the middle of April I should have some free time. I miss you and the other girls! I'm happy to see all is going well!
March 12, 2012 at 8:39 PM

Brian and Kayla said…
My kids are almost exactly as far apart as yours will be. I did what people are telling you to do. I put David in a toddler bed when he was about 21 months old. It was hard for about two weeks then things got better. Now my boys share a room. We have a doorknob cover so David can't get out. They still sleep in separate rooms when they nap though.
March 13, 2012 at 10:14 PM