By The Halls - February 20, 2012
Jan. 2012 1 year and 1 Month
She has finally mastered sucking through a straw.
She had a lot of fun with Mi Mi while we were on our cruise. She did get sick and Mi Mi took her to the doctor. My doctor told her not to tell me till we got back. HA! He knows me too well.
She is saying so many words.
She has started throwing more little fits when she doesn't want to do something.
Pey loves to give escamo kisses and hugs.
She always grabs my phone and puts it up to her ear and says HI. Uh oh I know 1 going on 16....
We attempted a french braid and it was an epic fail. 1. I have no idea how to french braid. Mind you I grew up with boys! 2. She would not sit still. Thank goodness for friends with girls,Youtube and Pinterest I'd be lost with out them.
Books are still her favorite thing besides Kilo which is by far her favorite word.
She loves kids! She just sits and stares and laughs at them when we have our mommy dates at Chick-fil-a.
I hate taking her to the store even thought it is one of her most favorite places. I get stopped by every old grandma(pa). They think she is adorable and I'm not going to argue with that, but you know those grannies they can sure talk. So the quick trip to grab some milk or eggs turns into a very long time.
She still hates bows. She likes to take them out of her hair and put them in my hair and says "Cute!"
She likes to run away from me and make me chase her. She thinks its a fun little game.
She has 4 teeth on the bottom and 2 on top.
She sleeps from 9:30pm to 8:00am which is AMAZING!! I can actually get stuff done before she wakes up. I go to bed at 10:00 most nights i'm still not adjusted from our cruise. I'm sure i'll get back to my regular mid night schedule in no time.
She cries when people leave. Pa Pa Hall came over for a bit and when he left she was so upset, it was sad and cute all at the same time.
She wears 18 month clothes and is still just growing like a weed.
We were in the Disney store last night and if we didn't already have 2 Minnies I would have got this life size one for her. She also freaked out when the Hot Dog song came on their tv and started dancing in the middle of the store ha ha ha.
My poor little miss is sick. I've never seen her this sick before, she has little red bumps around her mouth a bad cough and a runny nose. The doctor said she has Impetigo. There are different forms she has a staff infection of the mouth. She got it from her ear infection and her runny nose irritated her sensitive skin.
She has her moments of being really onry, but for the most part she is still just her hyper happy self.
I took a video trying to show Mike the bumps and her cough. He was a work and the pictures weren't doing it justice.  As you can see she is all smiles. She is more cuddly when sick so we've had some good snuggle time the past few days.

Feb. 2012 1 Year 2 Months
Peyton is 24lbs and getting big.
I ask her what does Kilo say? She goes woof woof it is pretty darn cute if you ask me. I have also taught her what a Kitty says. Peyton says "mow" like the snail on Sponge Bob.
I've been getting her away from signing "more" since it is so demading and getting her to say Please.
She can also say, Na Na (banana), Stinky is any diaper, Chase, Tillie, Grandma, Grandpa, Dane well Dane is more like Dee. She is getting the hang of Up if she wants me to pick her up and Down if she wants down from hold her or her highchair.  Sometimes she says NO to me... Usually when I've told her no like not to touch the computer so when I touch the computer she says no. How do teach a 1 year old "Do as I say not as I do? :)
Church is so hard with Pey. She can't sit still, I wonder who she gets that from? I cannot wait for Nursery. 4 months and counting! What is it like to be able to listen to a full lesson? They switched us to 11 and that is right durring her nap time. At home I can put her in her bed and she lays down with out a peep. At church it is a completely different story!
I also taught her baby. I showed her my belly button and she thinks that is baby. She also thinks every child is baby. We have ALOT of kids in our ward and durring church all we heard was baby baby baby. I am really regretting that one. Houston is the next word on our list.
Ever since her skin episode we switched lotions and now she loves Cedaphil. She always brings it to me then rubs her hands together when I give her some. Same with hand sanitizer.
She had a bad breakout of eczema and a few oatmeal baths cleared that right up.
She loves to dance anytime music comes on she is shaking her thang.
Pey has recently learned to throw her self on the floor if she doesn't get what she wants.... Isn't she a little young to be doing this?? I thought this doesn't start until the terrible twos? I can't help but laugh when she does this. It is really hard not to give in and give her what she wants.
Peyton was grumpy last night and I thought maybe her "vampire teeth" incisors are coming in like her friends her age have. Nope I felt her bottom gums nothing then I felt her top gums and in the mid back sharp teeth had already cut through. I believe they are her first molars. According to this chart she was suppost to get her lateral incisors first, I guess not. So I guess you could say we survived our first molars! 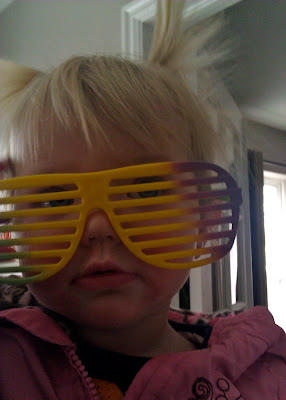 Waiting for Matt to come down the escalator at the air port. 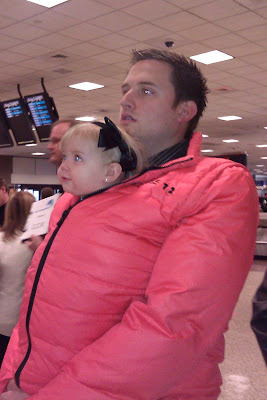 Like I said earlier 1 going on 16. Mike and her drive my parents to his a lot. I know its unsafe, but she LOVES it! 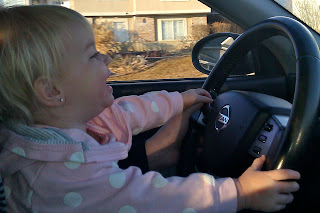 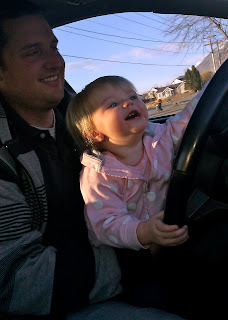 This is what Peyton does most of the time in the car. 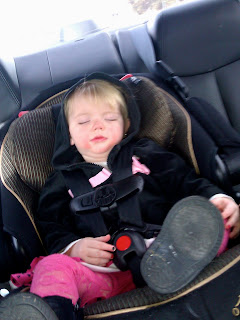 Peyton gets her teeth brushed and flossed by dad every night. She gets mad if he doesn't. 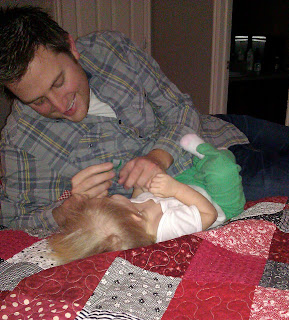 This is after a nap. 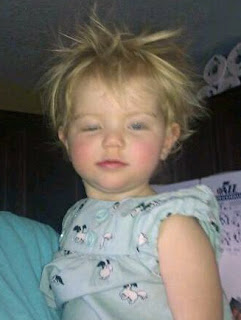 At Danes hockey game Mike and Pey playing on the ice. 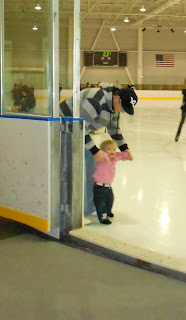 She really liked the slippery ice. 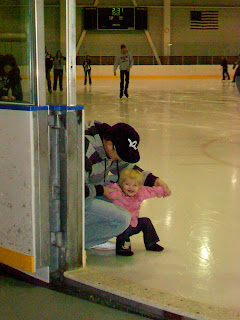 paislea said…
nikki she is so cute!!! i can't wait to see your little baby boy, too! i'm sure he'll be gorgeous!!

and yes, let's do lunch, soonnnn!!