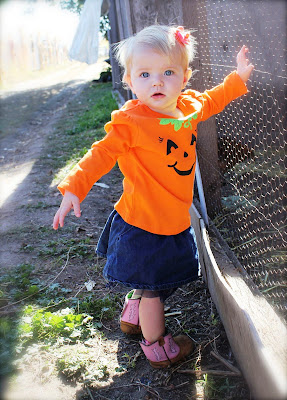 On Sunday we were watching Conference and Pey let go of the couch and took two steps before face planting. She has been doing it ever since. I am very exciting for her to walk, but at the same time I know I will be chasing her everywhere!
Now she is letting go and taking 3 steps then the face plant or she has learned to slowly sit down. She will let go of what ever she is holding and just stand frozen for a good 10 seconds.
* She loves to hold on to the couch and walk all the way around the room. Dad loves to let her hold on to his fingers and walk around the house.
* Her vocab is more than just baba dada and mama. She says Hi and Sit. Yup I was yelling at the dog the other day to sit and she said it clear as day. I got it on video, I should probably post it.
*She dropped her bottle behind the couch and said UH OH! I've been trying to teach her that for a while and now she says it all the time.
* One of my most favorite things she does is if she eats something she likes she …
4 comments
Read more
More posts