One year older and wiser too, Happy Birthday to you! 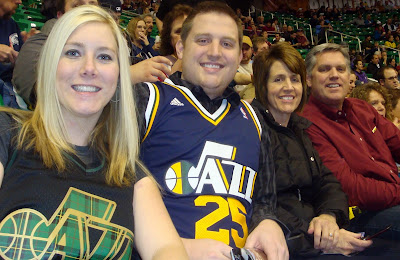 "25... I never thought I'd be 25. I feel so old." -MWH
Silly boy you're not old. You don't look old and you certainly don't act old.
The day for Mike at about 8:00 started off with me nudging him saying go get Pey, it's your turn. I was up with her all night. If I had remembered it was his birthday I would have got up, but momma was dead tired.
I gave Mike one of his presents at midnight and made him wait till we woke up for the rest. Which included: Lots of Coke, Lots of Cheese and Lots of Clothes. His favorite of the presents I think is the Big Al Jefferson Jersey that you will see in the pics to come. Hard to say though because if you know this man you know his love for Coke and Cheese.

We went to Biaggi at the Gateway Mall in SLC. It was scrumtruelecent (a Mike word). We were off to the Jazz game with Papa and Mimi. Always a great time with the Halls! The Jazz won which I think was icing on the cake for Mikey.