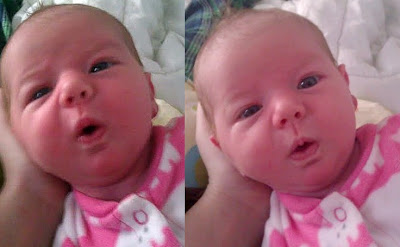 On Friday December 31 we had her 2 week check up. P weighs 8lbs 15oz. She is 22.5 inc. in length.
This is the face she makes usually when she is done eating. So cute!
Grandma Parry kissing her head
Grandpa Hall and P take a nap on Christmas
Dane kissing Peyton's nose

PTH is now 2 weeks old and oh how they have flown by. It's funny how the second I found out I was expecting I wanted time to speed up and now that she is here I just want it to slow down, but it seems as if it's doing exact opposite... * She does this thing where she won't open both eyes, she only opens one it's just a little. That's when we know she is dead tired. * If you try and swaddle her she some how manages to get her arms out. She hates having them tucked in so now we don't even bother. * She sometimes cries and it sounds like a little pig squeal (to go along with the snorting I mentioned the last post) * She has no problem lifting her head, her neck is so very strong.  * Peyton seems to be w…
6 comments
Read more
More posts