Pey got measured again this month her Length 27'' = in percentile 95  Weight of 15.18 = between percentile 25 and 50 .
I took her a few days ago because she had a really bad cough that was keeping her from sleeping. No infection just a little cold, the cough sounded worse than it really was.
*She is still chewing on everything. If she grabs your necklace or a toy well anything really it goes straight to her little mouth. Depending on what it is she will either keep sucking on it or spit it out.
* Her most favorite toy is a plastic bag or anything that crinkles. I have to watch her carefully since those are so dangerous. She loves them though!
* She laughs so hard when you tickle her then I start laughing at her and she laughs because I'm laughing. It's really quite entertaining :)
* She is one rollie drooly polli girl, if I leave the room I am shocked to see how far she has "traveled".

* If she is unhappy put her on her feet and she will start smiling again. She loves to stand. I try not to do it as much I want her to crawl first.
*Peyton is now eats 1 solid food a day, oatmeal or rice cereal right before bed time and formula through out the day.
*She can hold her own bottle now which gives me more time to get things done. She has to be flat on her back to do this though. If she is in her stroller or carrier she drops it a lot.
*She loves solid food! Prunes and Pears and Bananas are her favorite. She doesn't like Peaches.
* She is trying to crawl, but doesn't go anywhere. She gets frustrated and I have to help her out.

* P loves to be upside down, Mike discovered this... She smiles every time though!
* She is reaching for people like if someone else holds her she will reach for me! I love it :)
* She says ma ma ma still and my parents heard "Hi" out of her which is what I say to her a lot. Who knows though. Really early for chatter I think. She is babbling brook that is for sure. On car rides it is very entertaining.
* Her bald spot is filling in. It is defiantly still there, but I see fuzz so there is hope!
* She loves her feet, sucking on them I think is her favorite she also loves to pull of her socks....
* She has also learned to pull of her head bands. She even stretches them way and and smackers her self in the face...
* She hardly sleeps during the day, a half hour here or there... She is sleeping through the nights really good! Occasionally she will wake up 4 to eat then back to sleep.
* I've been calling her BOO the last few days from Monsters inc. I'll put a picture up in the next post so you can see why.
* Up graded the diapers from 1-2 now to 2 since she has gained some weight.
* Pey is wearing 6 to 12 month clothes depending on the brand and if it shrunk in the dryer.
January at Sharolee and Jason's wedding 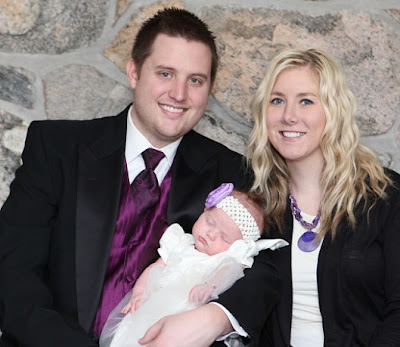 I still haven't cleaned up the tables and chairs from her blessing.....
It took her about 3 minuets, but she got him!
She is about 6 feet away from Tiger.

About 3 feet away now.

I've been getting emails that tell me what to do and one of them says to clap and cheer her on when she does something good. So now every time someone claps she smiles because she thinks its for her. It makes me laugh!
At the splash pad in Alpine, the babies were chilling. She love the outside, even sitting by a window is good enough for her.
P and Kaden