By The Halls - December 03, 2010
I am now considered full-term and boy do I look and feel it!
My Dr. is out of town till the 7th and so this week I went to someone else in the same office. I was excited to see if I've dilated at all, but he didn't check. I am now 187lbs which is 1lb over on where I want to be, but that's okay. He did tell me that as far as belly measurement I’m still right on 37 weeks 37 inches. They measure from your pelvic bone to just under your chest. He said I am having a hard time telling because her head is right on your pelvis and her legs and bum are up in your ribs. He said she hasn't dropped yet, but she is defiantly head down.
Dang it, I thought she had dropped, but no not yet. I have been walking funny because it hurts to walk normal. It’s more of a waddle now and Mike thinks it's pretty funny and I’m glad I can laugh with him. It actually hurts pretty bad when I walk though :(
I'm having a really hard time sleeping I wake up a few times every night and go get a drink and use the bathroom.
I am defiantly forgetful! I have to put everything in my phone calendar.
My belly button looks so strange. Mike thinks it is going to start poking out any day now. My belly also itches a lot. I know that if itch it, it will cause stretch marks and I already have some so there won't be any itching. 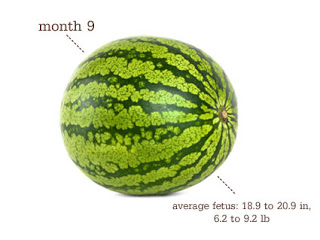 On a good note my ribs aren't hurting like they use to! That makes me wonder if she's dropped a little. I also don't have as much heart burn or acid reflux. It happens every now and then, but it’s not an every night thing anymore.

Esplins said…
Oh you look so cute! I'm so excited for you. I can't wait to see your darling little baby. I want to come up with a cute gift for you... what do you still need. Email me and let me know. Good luck the next few weeks. Let us know if you need anything.
December 3, 2010 at 5:49 PM

Tela said…
I love your picture is so cute! It looks like you are going to have a really healthy baby girl :) congrats on the baby
December 4, 2010 at 2:19 PM

Aubrey said…
So excited for you guys! Thats a bummer the doc didn't check you...at my 37 week I was dialted to a 3 and 90% effaced, it was nice to know I would probably deliver within a few days!

I also love how open and honest you have been about all things pregnancy related :) its fun to read.
December 6, 2010 at 3:36 AM

paislea said…
you are so darn cute nikki! i am so excited for your little baby to get here. I am going to spoil her!!! :)

you are so close and i am looking forward to meeting little payton!!

Anonymous said…
Beneficial info and excellent design you got here! I want to thank you for sharing your ideas and putting the time into the stuff you publish! Great work!
December 19, 2010 at 11:39 PM