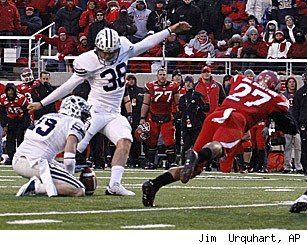 Right now I have a lot of feelings running through my body. Not just because i'm pregnant, but the hormones sure don't help in this situation. I should be extactic right now, but I'm not. I am very happy in some ways because overall at the end of the day a W is a W.


I feel like Utah deserved the win a blocked field goal is no easy task. BYU had their chance. The stats are fairly even, obviously... It was a close game! I just have to say though it makes me mad when people don't loose graciously. I am tired of all complaining. Accept the loss and move on. It's not the last time BYU will play Utah.


As Mike ( BYU fan)  and I (U of U fan) sat there during the first two quarters freezing to death we both discussed how we wanted to see some action and how both teams are not looking to good. We couldn't decided if it's because both teams defense were playing good or both teams offenses were playing awful.. Mike and I were both getting annoyed. I didn't like the BYU fan behind me that I really wanted to have some words with, but I refrained.


I have a lot of anger right now because of the way BYU fans treat Utah fans and everyone thinks that BYU would never... Its a rivalry and I realize I need to get over it, but its 2 years in a row that I've gone to the games and well lets just say I won't do that again. Like every sports team they have their fans that ruin the fun in the rivalry.
I don't agree with what some Utah fans did to Bronco, I'm still not sure how true all of that was. Thinks get blown out of proportion in sports. I also don't agree with how I've been treated.

After my rant about Max Hall last year I said:
Okay GAME TIME! We were up by six and lost it. I wasn't very happy with our special teams. With  the whole team actually. We gave BYU  113 yards in 12 penalties. Then BYU came back strong.  was down, and down by quite a bit. We came back to tie it! I was way impressed. With a freshman as a quarterback I was scared, I will admit! In OT BYU came back to win it. I was happy for them. It was a great game and really fun to watch!

So there you have it. My rant for this year :) GOOD JOB UTES WAY TO BEAT THE COUGARS!
BYU Rivalry UOFU

paislea said…
i saw the little widget on the side bar of your blog that says that peyton will be here in 20 days. it's completely crazy. i can't believe it's already been about 8 months. it's amazing. i'm so excited to see her!!!

**DiXoNs** said…
I will say i am a BYU fan. i have had way bad experiences with utah fans too. I have had them throw beer on me at the game and say way mean things to me too. It is a rivalry game. People (including both team fans) say and do stupid things when their angry and frustrated. However I do think it is so sad that people take a GAME so seriously and see people of the other team as such bad people coming from both sides. We are all people, no one deserves to be treated bad at a game cause of who their cheering on, I was happy for utah, they needed that win to help them further themselves. I agree with everything you said!
Lets just all get along! ha ha..
by the way can't wait for Peyton to be here! so excited for you guys!
November 29, 2010 at 4:08 PM

Alea said…
My family is split right down the middle. 3 U fans, 3 Y fans. My mom went to the U and my dad went to the Y... Can you guess which team they cheer for? It's not the school they actually went to. We are just a weird family.

Anyway, it doesn't matter how good or bad your team played. In a rivalry game people will just be crazy and say crazy things. I was at the USU v. BYU game last year and we were killing them and the crowd was still talking smack with each other. (By the way, way to go Utah State!... That's what Utah should be embarrassed about... That USU beat BYU by more than the UofU did!) But the same thing happens here in Idaho. BSU and UofI are big rivals. It doesn't matter how many points we creamed them by, the UofI fans will still diss Boise. I don't think the stats matter at all to people. It's just an excuse to hate something. Hate them for winning, or losing. And it happens on both sides and no one can deny that.